Paul Finebaum Has Sold Out

Here in Alabama, we don’t allow the government to forcibly confiscate tax money and spend it on higher education because we are especially invested in the idea of the humanities or training our workers. That would be Socialism and something that could be better accomplished by private institutions.

Instead, we let the state take our money and spend it on schools for two reasons: 1) Tradition. That’s how it was done before time began. And 2) College football. The NCAA has some rules and we need to have state-funded brick buildings and well-manicured green lawns and the illusions of academia because that’s how they let us have the football. Women’s sports? It’s because Title 9 says we have to have them in order to have the football. We need the government to perform this function because, what are we? Vandy?

All of which bring us through the Sunni-Shiite cultural stuff of Iron Bowl loyalties (I am on the Crimson Tide side of this particular arrangement) and into my point of the day, which is that Paul Finebaum has sold out. Finebaum is a ringleader of a lot of this college football stuff, a radio talk show host with a knack for simultaneously humoring and inflaming idiots. If you don’t know who he is, this New Yorker profile from last year ought to give you the gist of it.

The fact that there IS a New Yorker profile demonstrates the first part of my argument, which is the irrefutable fact that Finebaum has gone from a city newspaper columnist into a statewide radio figure into (now) a national television presence now featured on ESPN’s college football GameDay™ monolith and most of their various media tentacles. And for that, I say “Good for Paul.” He’s good at what he does and deserves money and acclaim. He’s not the vile kind of sports talking head that you might associate with names like Bayless or Cowherd or any of the other yammering sewers employed by The Worldwide Leader™. I don’t care if the Finebaum show is on WJOX or ESPN or a podcast on Slate (Hang Up and Listen is very good). If Finebaum is talking college football, I’m interested in listening. And his callers remind me of parts of Alabama that rarely get much attention, certainly not the kind of attention where people care about the opinions of people that live there.

So, I think I shared a kind of pride that our very own Paaawwwl (to borrow the plaintive and sometimes-furious intonation of his callers) has made it onto the big time, soaring ascendant like the SEC itself, sharing his opinions first with a satellite radio audience and now with a national television audience. Our regional quirks are now causing the Michigan, Notre Dame, Texas and USC fan bases to ask if they don’t actually, in fact, prefer the football played on Sundays.

I still listen to Finebaum’s radio show — not every day, but as time allows, more often during football season — sometimes several times a week. I’ve listened as long as I can remember, even though Wikipedia tells me that his show wasn’t syndicated until 2001, and so I probably didn’t actually listen in high school. But his voice and his memorable cast of callers are part of the landscape here (even if the callers are increasingly annoying because they have a warped sense of their own celebrity, causing them to play to types the same way people do on Honey Boo Boo or Duck Dynasty). That history is part of what makes it painful when Paul becomes less of the attack dog print journalist making droll quips at callers and more of the mega-connected friend of the well-heeled elites of the College Football Industrial Complex.

Beneath the surface of the wry provocateur cooking up the angry froth of quasi-lucid callers, Finebaum was occasionally a strident moral voice. But it became easy to forget this fact until he got called out two days ago by a caller who wanted to talk to him about a call in Saturday’s Alabama-Texas A&M game. I don’t have the audio clip readily available here, but it’s archived somewhere in ESPN’s online Temple of Doom. The gist is this: An Alabama player (Ha Ha Clinton-Dix, yes, that is his name) was penalized for “targeting” an A&M receiver on a play and briefly ejected. I say “briefly” because officials used instant replay to examine the hit and determined that it was not intentional “targeting,” and overruled the ejection. However, the 15 yard penalty would remain.

How, the nation asked all at once, was it possible for a review to absolve the player of an ejectable offense, but allow the penalty against the team to remain? Evidently, replay officials are not allowed to reverse this kind of penalty — just the ejection. Those are the rules and that was that. Alabama went on to win a thriller.

Callers to Finebaum wanted to talk about this scenario and Paul, having lost of lot of his famous patience with angry rednecks in recent years, was having none of it. He just kept reasserting that “rules are rules” until finally someone (I wish I could remember this caller’s name) said (I’m paraphrasing a bit here), “Paul, why don’t you do what you used to do when you were a print journalist and grab onto this issue and carry the torch and advocate for a change to the rules?”

Paul had nothing. The caller was right. Paul had lost the ability to demand reform as he once did in the role of a journalist and could only resort to the authority figure’s favorite default rationale for things: “The rules are the rules.”

He was totally unwilling to entertain any sort of call for larger reform of the rules, any sort of normative discussion about what the rules should be.

This observation caused me to look back at other recent Finebaum foibles with a new cognitive light. When he was schooled by Desmond Howard on the GameDay™ set on the subject of paying players? Same deal. Howard was saying that players were providing free labor in a system reaping billions of dollars from their dangerous work. Fact. Finebaum’s response? The 1950s line that scholarships constitute compensation. Howard’s outrage over the fact that college student-athletes are some of the only people in the world who are not allowed to profit from commercial uses of their own likeness? Finebaum: “The rules are the rules.”

This limp defense of the poverty-exploiting status quo is not befitting of someone once considered a journalist. It’s one thing to have a TV gig but maintain a reporter’s personality (see also: Pardon the Interruption). But when you are hanging out with university chancellors, heads of athletic conferences, and ESPN suits all the time, you can’t let the expense account lunches and nice shoes prevent you from having some kind of idealism and passion about what the world ought to look like. You can’t (or shouldn’t) divert otherwise valid criticism leveled at the system, even if that system is paying you lots of money.

Or to put it in the words of one of the regular callers, “Aw c’mon Paaawwwl!”

Saturday is coming up. And then, after that, another Saturday. And then another, on and on, beating against us like the ceaseless tide.

Speaking of the Tide, that is the football team we pull for in the great Sunni-Shiite football wars of this state. [Sidebar: I have used that analogy multiple times to characterize the depths of the religious passion felt by college football fans in this state. It is useful to convey strong passion and the sense of the either/or binary. However, it has also resulted in several people asking me whether Bama represents the Sunni or the Shiite in the analogy, leading to some pained expressions of ignorance regarding Islamic theology, not to mention the political situations in any number of foreign countries.]

So, we pull for Bama and we happened to be in New Orleans. Perhaps you will find yourself in a similar boat, hoping to spend some part of some Big Easy Saturday in some sort of place with a television, in whose hypnotic light you hope to bask while pulling for your beloved Crimson-clad unpaid workers.

May we suggest that you find your way to 1100 Constance Street, to a bar called The Rusty Nail?

I only learned of the place when wearing my Bama shirt around town on Saturday morning. I was responding to various “Roll Tides” and such in my usual genial way, hoping not to be too much the tourist as I took the St. Charles trolley line for the first time. A woman on a bicycle not only gave me a RTR, but stopped to ask if I was going to watch the game at the Rusty Nail.

“Oh, dear,” she said with all of the empathy of a concerned mother, “you simply must go.”

It was as if she were ashamed of my ignorance. So I went. It was within walking distance of the place that I was standing when I received her suggestion. 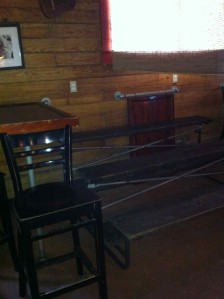 A bar with bleachers. Yes!

They have bleachers in the bar. They have an amazing patio. They were grilling food on said patios, including veggie burgers. The bartenders were wearing Bama shirts. They had a half dozen TVs, all showing college football until the 2 p.m. game (versus Arkansas), at which time all TVs were flipped to the Bama game. The bar owner (named David, I think), is a Bama grad who not only stands there watching the game with the massive crowd of fans that assemble, he (and this is important) actually mutes the commercials during the breaks in the action.

It’s all well and good that this bar is where the New Orleans chapter of Bama alums likes to gather. That’s nice and it’s wonderful to watch the game with like-minded fans, wearing crimson and shaking shakers. It’s as close to a game day environment in a non-Tuscaloosa bar that I have ever experienced. But the fact that the owner mutes the commercials and plays the Alabama fight song, along with topical music, well, that’s just over the top. James Brown was in heavy rotation, and the commercial break after a Razorback TD brought us Cee Lo’s “Fuck You.”

The bar was nearly full, but not so crowded as to be uncomfortable. In case you’re wondering, yes, people really do pack out the bleachers. I didn’t take any photos (other than the one above of the empty bleachers) because I was busy getting drunk and watching the game. Folks were lively, but not out-of-hand, fueled by a steamroller of a Bama win and healthy pours from the bartenders. Did I mention that they have an immense collection of rare scotches?

Truly, this is the best bar for watching Alabama football in the nation. This owner, these bartenders, they know what’s up. I cannot highly enough recommend

Taken amid the swirl of postgame confetti and chaos

Posted in Picture of the week