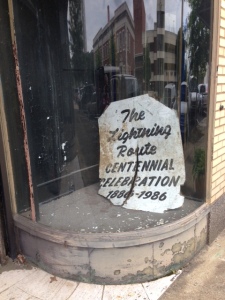 Did you know that Montgomery was once home to the nation’s first electric trolley? It was a marvel of the times, a true wonder of science, technology and progress. We were envied by the rest of the world for our public transportation.

No more. Now, we only drive cars or trucks, burning fossil fuels and cutting off the poor from employment and health care. Out city buses became famous for racism and tactics deployed against it. We now incentivize sprawl, which is convenient for those looking to flee neighbors that don’t look like them or share their values.

This sign is still on display downtown, as poetic in decay as the discarded idea it represents. Here’s hoping that one day our city will again be on the cutting edge of something good.

So I’ve decided to learn to take the bus in Montgomery. When we moved here, I was cautioned that the bus system here was famous for reasons other than its effectiveness or efficiency. Also, when I said I was going to be taking the bus, our realtor seemed appalled until I said that I liked taking buses. Then, disoriented by an expression of pro-public transportation sentiment, she told us some confusing story about teaching a developmentally disabled person to ride the bus that was much too long to be uplifting.

Now, I’ve taken the bus in a lot of different places. I lived in Seattle, where it’s a joy to ride the bus and everyone knows all the routes by number. I used to live inside the free ride zone downtown, the outer end of which extended to the Uwajimaya parking lot. This allowed me to ride home joyfully schlepping huge bags full of strange ingredients and fill the halls of my Belltown apartment complex with the smell of Vietnamese stews and rich miso-flavored things.

I’ve taken the bus in New York – most memorably in Queens during a fairly epic snowfall after visiting a school that was practically in Canada. I was soaked, freezing, confused, and still managed to make it back to Manhattan thanks to a handful of guys that stopped me from getting on the wrong subway after a serious of badly chosen bus options.

I never took the bus in LA, though I have had a long love affair with the Metrolink and hate the LA “subway system” like a failed love affair.

The Atlanta buses were always perfectly fine, although they were my first experience with weird “transit holes,” IE neighborhood sections simply not served by buses or trains, where you had to walk for some distance to get on a bus to take another bus to another bus to maybe get on MARTA. That’s all fine, unless you want to leave the perimeter (and why would you?), because trains don’t really go there. I actually attended community meetings when I lived in Atlanta where people would say, basically, that they didn’t want the train to run to the burbs because people would go out there and steal things. This always made me think of people riding the train back into the city with giant TVs on their laps or some such thing.

systems are uniformly pretty bad, but are usually more or less functional for the people who ride them. I was optimistic. Today I simply wanted to go downtown to meet my boyfriend for lunch. Seemed like it would be easy.

I went to the MATS website. At first glance, it looks like they would have all the tools you’d need for a successful trip. There are even Google Maps for the bus routes. Sure, the buses don’t run that frequently, but it is a pretty small town. And sure, the schedules don’t list in-between stops – just major ones. Still, it seemed like a smooth ride was in the offing – especially after I spoke to someone at MATS about my planned trip and they assured me that I could catch the 10 bus at Norman Bridge and Fairview. So I walked up there, listening cheerfully to an episode of This American Life and enjoying the almost-fall weather.

And finding no stop at Fairview and Norman Bridge, I walked some more. West on Fairview toward Court Street, where I knew the bus would likely go south. This is not a particularly short walk, and is made quite difficult by the fact that Fairview, like most streets in Montgomery, has no sidewalks. There are two possible explanations for this: a) No-one expected that anyone would be a pedestrian here, or b) Civic planners have decided, basically, to discourage people from walking and/or actively try to kill them by forcing them to walk on people’s lawns or in the road. This walking is made more difficult and infinitely more annoying by all the people who honk at pedestrians. I’ve never, ever, lived in a state where there’s so much honking.

Arriving at Court and Fariview, I found a bench with a Route 10 schedule. Shortly the bus came by. So far so good. The route took me south on Court, across on Delano, and back up Norman Bridge (the route I had JUST walked). Then we went west to the MATS transfer center, back east on Fariview, and south on Rosa Parks, ending up downtown on Montgomery, just by the Davis theater. As I was leaving, I asked the driver if I could catch the bus right here in an hour. He said yes.

So far so good. A nice lunch and a walk around downtown behind me, I went back to the place I had caught the bus. There was no bus stop there. I remembered reading on the site that buses could be waved down. I was pleased to find this worked. The trip back was uneventful, and I even figured out where there was a much closer stop on Norman Bridge for next time. If only more detailed schedules were available online. That may be too much to ask for a website that still advertises access to the MATS “Trip Planer.”