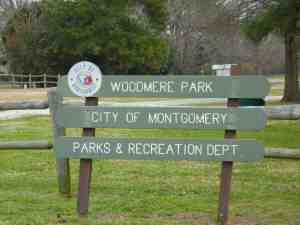 Regular readers of Lost in Montgomery know that we’re keen on exploring the City of Montgomery’s park system (90 parks!). We’re interested in outings with the dog and discovering the city’s various flora and fauna. We’ve been out to Blount Cultural Park a few times (keep meaning to write that up), but wanted to take a dog walk at a new place with less goose poop. So one cold Sunday we decided to visit Woodmere Park, across the street from the Shakespeare Festival.

The park is about 20 acres, divided into two sections. When you pull into the parking lot, the section on the left side has trees, a small playground, picnic zones, and a drainage ditch. This part of the park is called the “football field.” You could, in fact, get a game going there. Hopefully your ball would not land in the drainage ditch running past the side of the field, but otherwise it seems nice. The other side of the park has a mile trail around it, and on the day we were there there was not another soul in sight — not even in the back yards of the many houses that border the park. Which we could basically see into the back yards of dozens of houses. Which was kind of voyeuristic and weird. Also it was a cold day, so it’s not a major surprise that there was nobody out in their yards, but still it seemed vaguely like there could have been some kind of zombie apocalypse that we didn’t hear of, and the next “person” we saw while walking the trail might try to eat our brains. Fortunately, this did not occur.

If you go to Woodmere be prepared for the strange inversely proportional ratio of essential equipment (like benches and trash cans) to culverts and drainage ditches. There are a lot of the latter, and not so many of the former.

But, despite all the scenic concrete culverts, the walk is pretty nice. And, unlike walking across the street at the Shakespeare Festival, you don’t get much goose poop on your shoes at all.

A bench. One of the few.

Geese preparing to kick off

Drainage at the “football field”

Map of the park

Some criminal guidance from the culvert 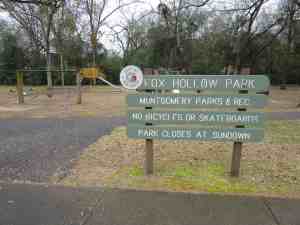 Dog. In service of this goal, we’ve seen some of Montgomery’s worst scenery, trekked to Wetumpka to learn about the French and Indian War, discovered the disturbing truth about our Riverwalk’s sexual preferences and found a competitive (and, it seems, infrequently used) horseshoe pitch.

We’ve driven by Fox Hollow Park on the Atlanta Highway a few times, mostly when going to Health Wise Foods, or the Goodwill, or the mall (the latter usually reached under extreme duress requiring at least one margarita afterward). So the other day – one of approximately two days without rain in December – we decided  to make a trip out of it.

Sadly, the park was not the destination we were hoping for. Which is not to say it wasn’t perfectly nice and inoffensive. It is a well-kept small neighborhood park with some playground equipment, a picnic area (boasting a grill that is clearly not a city-issued device), and an evenly paved trail that goes around the perimeter of the park. The park itself adjoins the Atlanta Highway, so there’s a little traffic noise and the concomitant danger that probably discourages off-leash dog action (not that we would ever do that). It’s nice. The grass is well kept up, and there’s even space to get a flag football game or something like that going. You could throw the Frisbee and there are some nice middle-aged trees. It’s clear that the neighborhood likes the park and probably gets a lot of use out of it.

It’s just not a destination park. That distinction has to be reserved for city parks or the Shakespeare Festival grounds or even Vaughan Park. But Fox Hollow Park is perfectly decent and might make a good place to have a picnic. It makes a nice selling point for the houses in that little neighborhood and we’re glad the city counts it among the many parks that it bothers to maintain.